A nice collection of DDG-51 class models - never seen that many in the US!  Models are about 7 feet long... 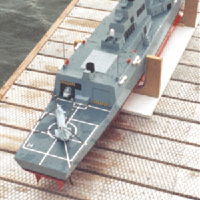 Jim also sends a couple of shots of a Flight IIA Burke model, the USS Roosevelt (DDG-80).  Note the roll up doors on the hangers.

Eric Bertelsen sends some pictures of his projects: 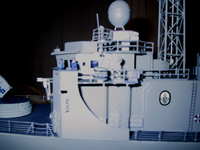 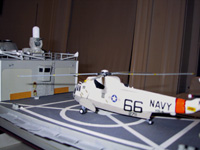 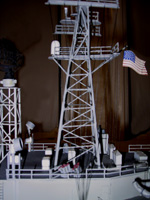 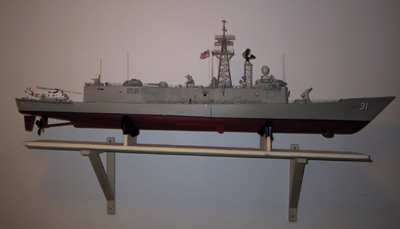 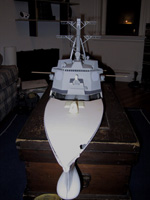 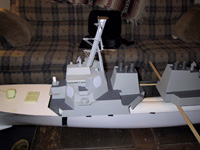 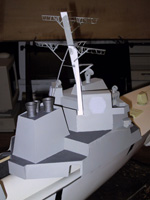 His latest project is the USS Winston Churchill.  Here we see the mock up of the superstructure over the hull. 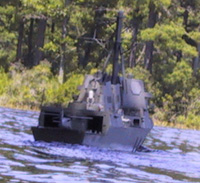 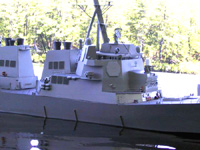 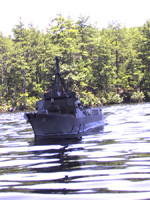 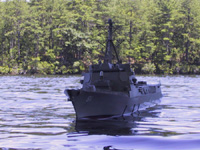 In July, Eric sent some pictures of the Winston Churchill underway - looking good!

His model is shown underway during a test run to check the ballasting.  All the fittings you see have been hollowed out for lightness; a very important consideration with destroyer models.  This initial run was a success, with just minor changes in ballast needed. Stan is building her in 1/100 scale, using the Scale Shipyard Hull.  These images give a good idea of the proper way to frame the underneath of the deck.  Notice the doublers under the main and secondary turret locations, and the network of braces.  Proper substructure will result in a strong model that can resist the effects of sun and time.

Brad is also beginning work on a USS Missouri, also in 1/8" to the foot scale.

Both ships are built on Scale Shipyard hulls, and also using parts from that company.