Patrice is building the Richelieu as she appeared in 1941, and hopes to have the project completed by the end of 2005.  The ships four propellors are  each connected to an individual  motor, connected in pairs to  two home made speed controllers.  He started the project in 2003, and will be including many working features, including main and secondary batteries, radar, sound modules, lights and an electric water pump.  As we get more photos of this fine model, we will post them.

Shots of the hull under construction

The deck and superstructure begin to take shape 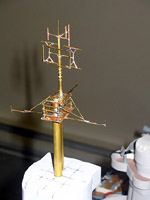 The model begins to come together

Note, this model is for sale.  You can read more about it on Frederick's website, Sirius Replicas  http://siriusreplicas.com/models/mil/ffg-54/ffg-sale.htm

Frederick is scratchbuilding this Perry class frigate, starting with a basswood hull, covered in polyester resin.  He is also casting his own detail parts from scratchbuilt masters.

Don started with a Scale Shipyard hull, and scratchbuilt the rest of the model.

August 19. 2006 - Don sends in a few more pictures of the ship under construction and completed

USS Yancey AKA-93 by Ken Groom.

This ship was a participant in the Admiral Byrd expedition to Antartic called "Operation Hijump"  She was scratchbuilt by Ken.