Mike sent in these pictures of his 1/39 scale costal patrol boat.  It is a scratchbuilt, basswood plank on fiberglass frame hull, covered with fiberglass.  It features a RIB daughter boat that is winched via R/C onboard while underway.  A four channel radio controls everything. For those who noticed that the hull number is "11" instead of 14, Mike writes that he needs to work on his  freehandpainting technique so more before tackling the number "4".  The main power comes from the standard Dumas set for the USS Crockett, along with a Tamiya geared motor for the RIB retrieval winch.

Normandie Manlapas sends in photos of this USS Stetham model and the Phillipine Sea below.  They are both built on Scale Shipyard hulls using some Sirmar detail parts.  This model of the Stetham is Chito's first effort, and he is doing a great job.  He is also building a guided missile cruiser.

Jack has been building a Russian Krivak 3 frigate from scratch. It is 1:72 scale, it's 68" long and the beam is 8" wide. Dry weight is 25lbs and it took 3 years to build it ; Jack says it is almost complete.

The model has a fiberglass hull  made from 3 layers of fiberglass gel coated, 2 Johnsons motors with 1.5" brass props operated by 2 Sp-610RF speedcontrollers made by Hi-tec. The frigate is powered by two 6V batteries; one for the motors and the other supplying electricity to the lights and other equipment. It has a moving 180 degree front turret, operated from a cervo with a "Go-Slow" device designed to reduce turning speed on the cervo, so it moves very slow. It has 60 port-holes on the hull,  22 custom made plexiglass windows and 16 port-holes on the superstructure.

There are 84 running lights on the model. Every porthole has a light. The ship has a helicopter pad with operating lights and a Kamov Ka25B helicopter in 1/72 scale made by Airfix. There are 24 model sailor figures on the ship to compare the relative sizes of the ship and the sailors.

A little bit of the history, the patrol ship itself was designed for patroling Russia's 200 mile economic zone,  as well as reconnaisance ASW, and convoy escort. She has a powerful weapons fit, including anti-aircraft missiles, automatic gun mounts of 100mm and 30mm caliber, modern means of radio-location, data-procession and control, ECM, Sonar and a full suite of anti-submarine weapons. Krivak III's can also support a Ka-25B Hormone helicopter. 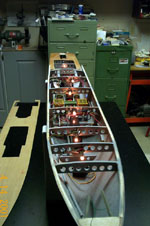 This 1/96 scale model is built on a converted Sirmar hull, and detailed with Sirmar fittings.  It took Paul 3 years to complete. 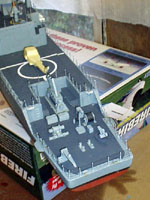