Welcome to the Museum Models Page.  From time to time I get a chance to visit various maritime museums and photograph high quality, large scale models.   Though not Warship Models Underway, they are valuable references.

If there are similar models near you, please send in some pictures.  Sometimes local museums or state capitals will have large scale (1/4"  or 1/48 scale) builder's models.  For example, the Iowa state capitol has a very nice large scale model of the USS Iowa on display.; I would like to see pictures of her.  So, as always, your photo contributions are very welcome!

These Pictures were taken 7/19/00 at the National Maritime Museum, San Francisco...

This model was built at Mare Island, where the real ship was constructed.  It represents the ships as she appeared in her original form as launched.  She was heavily damaged at Pearl Harbor and extensively rebuilt with a very different appearance thereafter. The model is 1/48 scale - check out those cage masts!

This grand old ship, a veteran of the Spanish-American War, was preserved as a museum until World War II. Then, she was turned over for scrapping, partially stripped, and turned into an ammunition hulk. A sad end for "McKinley's Bulldog"! 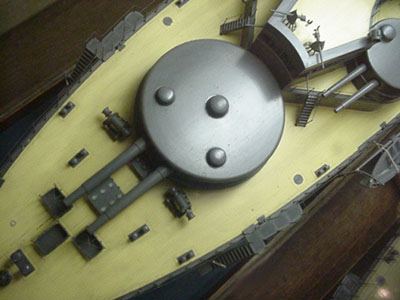 This page viewed 589 times. Thanks for visiting!