The photo's show my 1/48 scale Casablanca Class Escort Carrier, the USS Gambier Bay.  The ship is 10 feet 6 inches in length.  The dry weight is 140 pounds.  It has working smoke generators for each of four stacks, rotating radar, digital sound,  rotating props on all the planes, and an automatic water ballast system that lowers the ship to the water line and discharges that water when I sail her.

The ship has over 100 figures on board,  nine  1/48 scale Wildcat fighter planes and four 1/48 scale Avenger bombers. The flight deck has over 1000 individual planks, and working arrestor  cables.

She  won Best of Show - Boats at the WRAM R/C Show this year in White Plains, New York.

The model is powered by two 12v Pittman 3700rpm electric motors reduced 2 to 1  to drive the shafts.  The  three inch props are cast and match the pitch of the real ones.  Each prop shaft runs in a stuffing box using two roller bearings to reduce friction.  Each motor is has its own speed control. I use two 12v 26 amp wheelchair jell cell batteries for power;  one is for the drive power and the other works all the accessories including the water ballast system.  The batteries are switchable from the transmitter in case I stay out to long.

The water ballast system consists of four high volume RV water pumps at can load on board 120 pounds of water into tanks built into the hull. One button starts the pumps, a second reverses the pumps.  It takes 90 seconds to load the ballast into the hull.

The hull is made from 62, 1/4 inch thick plywood frames with a 1/32 plywood skin covered with two layers of fiberglass cloth.  The keel is a 2 inch by 2 inch piece of red oak.  The center section of the flight deck is removeable for access to the interior of the hull. There are 20 of the 20mm anticraft guns and 8 of the 40mm guns along the gallery deck and catwalks. Over 100 rubber molds where made in the construction of the model.

Here's a little history of the ship, it's the only US Navy aircraft carrier ever lost to a surface action.  It was hit by shells from several Japanese Heavy Crusiers and Battleships during the Battle of Leyte Gulf in the Philippines.  It was commissioned in Dec. 1943 and sunk in Oct. 1944.  The Gambier Bay was part of Taffy Three operating in the Samar Staits.

Thank you Ed for a great model and write up - Kurt 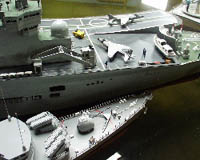 Here she is being nudged by HMS Avenger, Type 21, believed known in the RN as the "sports car of the Navy" for herinstant speed from her gas turbine engines. 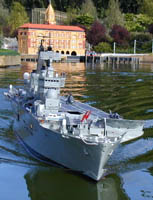 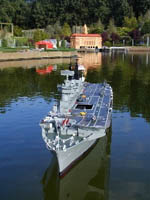 She has left her berth at Auckland's waterfront, with landmark "Ferry Building" model in the background. 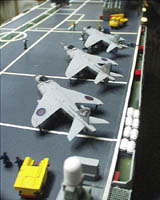 Part of her deck park of "Shars" (Sea Harriers)

The Illustrius was built by Dick utilizing the Sirmar semi kit.  Thanks Dick!

Dick Hopper shares more pictures of  the rest of his fleet... 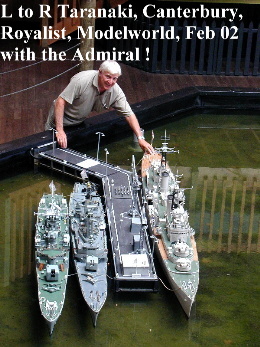 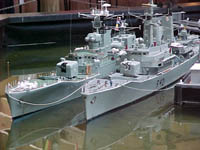 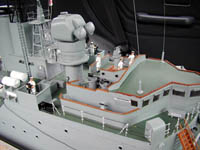 Dick writes: The Hopper naval dockyard has had a break for about 6 years, building passengers liners. Now it's back to making four Protector-class inshore patrol vessel, of Royal New Zealand Navy. GRP (fiberglass for those of us in the U.S.)  hull, l.o.a. about 2.5ft., 12v. power supply, 2 channel, twin motors. Here are of the first two being sailed and static display. They are named after New Zealand lakes - Rotoiti, Taupo, Hawera and Pukaki.

At 12' long it requirez a trailer for transportation, and is nicknamed by Dick's fellow club member HMNZS Hernia!