My Scharnhorst is 1:128 scale, based on a Fleetscale hull. I got some fitting from Radestock (Editors note, he is no longer in business.) and Loyalhanna Dockyard, where I also purchased the Electronic Speed Control and the Motors.

I have an Airtronics 6 channel Radio that I bought from Skip Asay , originally for a Sub and have an extra receiver for the ship.

Iīm planning the construction of a electro-mechanical multi-switch to make the main turrets rotate and elevate the barrels, and other functions like rotating of the range finders,the 15 cm guns and the catapult.

January, 2004 - Carlos sends in some new photos of his ship in the water, and the superstructure in progress... 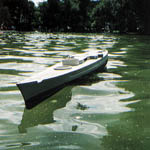 Adrian writes in from New Zealand, sending in these photos of his first model ship, and quite an ambitious one at that, a 1/96 scale model of the USS Missouri. She is built on a Scale Shipyard hull, with John Haynes fittings.  The superstructure was constructed from 5mm balsa sheet.  A very impressive effort!

The Missouri is shown operating with Adrian's latest, a 1/96 scale USS Fletcher made from the Dean's Marine kit - another very well done model!

Paul has been building this model for a bit over 3 weeks at this point.  It was based on a Scale Shipyard hull that Paul said was delivered remarkably quickly after his order was placed - about 3 1/2 weeks.  He has been using Scale Shipard fittings, and plans on making figures using Preiser railroad minatures as a basis.  We will post more pictures as we get them from Paul.

Nils sends in this photo from Sweden.  The ship behind is the "Indochine", built by Magnus Persson.  All the ships were scratchbuilt.