Here are some nice views of his USS Harrison DD-573, a 1/48th scale model built on a Scale Shipyard hull.

Finally, some views of the USS MacDonough DD-351 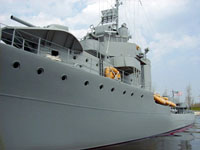 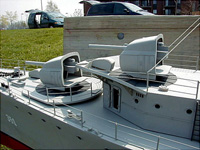 Dwayne has just finished another 1/48 scale model. This one is of one of the Canadian Upholder/Victoria class submarines HMCS WINDSOR SSK-877

My friend Ryan is building a 1/96 scale Spruance Class Destroyer, the Fletcher.  Here are some pics of her operating with the John Paul Jones

Ryan is also building a 1/96 scale Container ship.  Be sure to check out the custom superstructure <g>!

Willima Blackmore, of Cottage Industry Models, writes: "I took my model kit of the C.S.S. PALMETTO STATE (1/96th scale) and jammed a bunch of radio gear in her, and low and behold she floated at the waterline the very first time I put her in the water!!

I used a disassembled standard servo for propulsion which also gave me full proportional fwd. and reverse speed control. the radio is a Ace Nautical Cmdr. 7 channel system. the model measures about 24" long and about 6" wide. The casemate is removable to gain access to the system, and just like the original ship, she is very slow and cumbersome, and not meant for anykind of rough water. So, Yes Virginia, resin models definitely float quite well!!

Jerry Galvadon has a great 1/72 scale USS Colorado model, complete with cage masts - be sure to check these pictures out!

USS Saint Paul (CA-73) operates with USS Chicago (CA-29) both models are in 1:96 scale. Operating several large models in the same scale together can be quite fun and sometimes challenging.

Jim Hawkins works on his 1/96 scale USS Chicago (CA-29) model - when he can.  Jim spends a lot of time organizing regattas in the San Diego area for the benifit of model ship builders.  Thanks Jim!

Dave Manley works on his new Lafayette kit at Santee Lakes, in the San Diego area.