Well, the end of September meant it was time for another Warship Regatta in San Francisco's Golden Gate Park. Coverage this year is supplement through the kind efforts of Fred Paratuard and Chuck Gerke, who both contributed photos - thank you gentlemen!

If you would like to see excellent coverage of the submarine side of the regatta, I highly recommend checking out Tim Smalley's site on R/C subs, which you can see by clicking here.

Prior to the regatta, I hosted some of the participating modelers over at my house for a pre regatta shindig, featuring pizza, soda, superglue and spraypaint...

Lots of modelers took advantage of the chance to meet manufacturers, such as Dave Manley, Skip Assay and Lee Upshaw.  Here are some of Lee's hulls that he brought with him

Years ago I started building a model of the Graf Spee, then other things came up and the project was put away.  For this regatta, I dusted it off, got it running, and ultimately sold it to a young modeler who wanted it.

A group of models brought up by Jack Bitters

I had a chance to run my John Paul Jones quite a bit this weekend since others were taking pictures. The Flycasting pond is a great place to operate, with crystal clear water and a nice launching area.

Ralph Glews from San Francisco brought a few of his models to the pond, but not his large Yorktown.  Perhaps next year we will see two carriers operate!

James Lovelady brought a model he built a decade ago, the USS Sommers (DD-381).  He also built a magnificent North Carolina (BB-55) that he plans to restore to operation, and is currently working on a CV.  Welcome back James!

The local warship combat group put together a nice display to get the word out on their variety of warship modeling, which can be very exciting.

This fine model of the USS Port Royal (CG-73) was built by local modeler Corrado, though the color of the deck needs correction 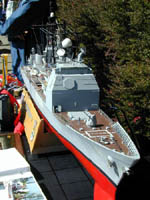 Kevin Gatton has made a lot of progress in just a couple of months with his new project, the USS West Virginia (BB-48), as she appeared at Pearl Harbor.   The next step for Kevin will be to make the Cage Masts for this beast, a daunting task but one I am confident he will master

Be sure to check back next year for the 2003 San Francisco Military Regatta!