Smaller Harbor Tugs are listed under Yard and Service Craft

Very powerful tugs capable of pulling the largest ships in the Navy's inventory, built on a commercial design.

Photographed 11/02 after she had been sold into Civilian Service.  Still looks much the same as she did while in the Navy, even down the haze gray paint. 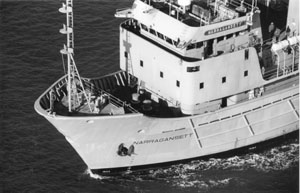 I have been taking pictures of this ship since before I started SeaPhoto. I really intend to build a model of her someday. Really.

Taken during the early 1980's by Lee Upshaw

Note: Naval Harbor Tugs are being replaced in many locations by Commercial Tugs.  One organization that has contracts in San Diego and Port Everglades is the Chouest Company. Their tugs are in the commercial tugs section. 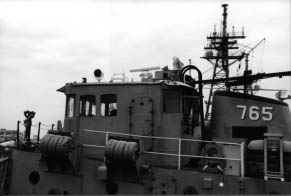 Set YTB 813B 6 views of bow in drydock ,from about waterline up, foreground obscured. Attachment points for fenders. Q7 $ 4.50

Note:  This is one of our new digital sets, that can be blown up to at least 8 X 10 and often larger if you would like bigger prints.  Please contact us for details.