Two very interesting subjects here. The Sea Shadow is an experimental stealth demonstration vessel, built by Lockheed for the Navy. It's faceted appearance is suggestive of the Arleigh Burke class DDG's, for which she may have contributed data. Sometimes dubbed the "Batboat", she is a rare sight.

The Sea Shadow was built inside a barge, but not just any barge. This is HMB-1, used with the Glomar Explorer in her clandestine adventures. This barge is capable of submerging, and has a roof that retracts to allow the Glomar to extract a large claw, used to pick up Russian submarines and whatnot.

Set Slice B 9 views, from fantail of Destroyer, overall and detail of fore part of the ship, nice views. Q9 $ 6.75. Set Slice C 9 views, from fantail of Destroyer, overall and detail of fore part of the ship, nice views. Q9 $ 6.75.

One of the most famous "Black" projects of all times was the covert salvage of a Russian submarine from the waters of the Pacific. This is the ship that did it, shown in early 1996 at the reserve storage facility at Susuin Bay, California 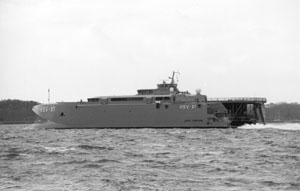 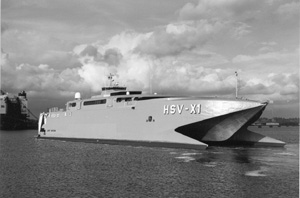