The mightiest warships every built, the are the quintessential American warship of the late 20th century. Both fantastically capable and expensive, the Navy is looking for alternatives to this design at this writing, but so far, has found none.

Photographed 2/94 in the English Channel 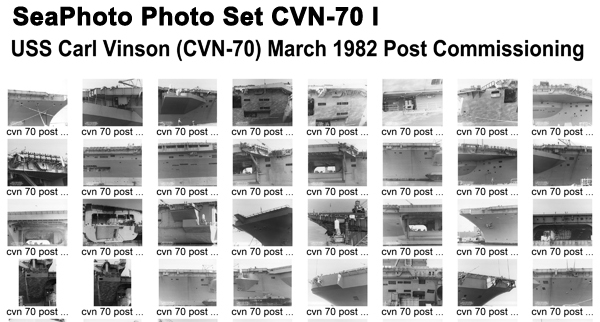 The foillowing set was taken October 2011 at San Francisco, California.  These are digital shots, so if you chose digital delivery you can zoom in on the details.

The following set was taken in October 2009 at Norfolk, VA by William Upshaw.  If you choose digital deliver you can zoom in on the details.

One of the most famous warships of modern times, the Enterprise was the first nuclear powered aircraft carrier. Photographed by Kent Strapko at Norfolk, VA 6/00

Their days are numbered, but at one time these conventionally fueled behemoths ruled the oceans; they are being phased out in favor of their larger, nuclear fueled cousins.

All but set CV64A Taken 3/96 at Alameda NAS and from the Golden Gate Bridge - useful sets.

These were the first of the supercarriers - designed to operate the ever larger jet aircraft entering the fleet. The class was controversial at first, critics deeming they were too large, but operational experience after they entered service proved the concept.

The following views were taken at San Francisco, CA , 9-88

Set CV62G 4 views, from shore, nice overalls from various angles. These are all nice portraits. Q9 $ 3.00

2 of the 3 ships of this class served for many years in the US Navy, giving extraordinary service for what was a World War II design. The Franklin D Roosevelt (CVA-42) was discarded many years ago, the Coral Sea (CV-43) much more recently, but there is an effort to preserve the Midway in San Diego as a museum vessel.

This group of aircraft carriers was designed and built during the Second World War. It is a tribute to the flexibility of the design that they served for so many years, in roles ranging from traditional attack, to antisubmarine, amphibious attack, and even spacecraft recovery.

Another nicely preserved Essex class, she is part of the Patriot's Point collection of warships, Charleston SC. Photos taken 8-93

Preserved as a museum in New York City. All photos were taken 8-94

This ship was the subject of a successful preservation attempt at Alameda, CA. The views below show the ship after years of storage.

Photographed just prior to her scrapping by Lee Upshaw at Tacoma Washington. She was the last unaltered ESSEX class carrier at that time, and still had her original straight flight deck and 5" guns. 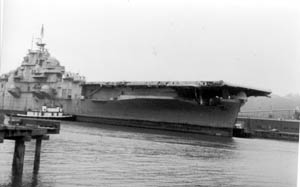 Photographed while awaiting scrapping, she is in bad cosmetic shape.

Other views, taken at Mare Island, CA just before scrapping are available, and include details along port side.

Her fate was sealed and she was scrapped, despite many attempts try and save her. Photographed at New Orleans, LA 9-95

If you arrived from another site, just use your browsers back button to return