These very expensive ships were discarded after a short careers, due to budget considerations, leaving only Aircraft Carriers as the sole nuclear powered surface vessels in the US Navy.

Set CGN40A 5 views, from shore, overalls from various angles and one detail of bridge. Useful, but hazy shots. Q7 $ 3.75

The third nuclear powered surface ship in the US Navy, she has been decommissioned and scrapped in Bremerton Washington.

These views of the recently decommissioned cruiser were taken at Norfolk, VA by Michael Leonard

She was the first and largest surface combatant nuclear warship in the US Navy. The Long Beach was, with her boxy superstructure, one of the most recognizable warships of her time. She was scrapped in Bremerton, WA during the mid 90's.

These views were taken by Gary Lewis around 1970, at Mare Island, CA. Though some are a bit dark, and the others blurry, they are useful for modelers.

Set CGN9A 6 views, from shore, dark or blurry, but useful details along starboard side. Q7 $ 4.50

Based on Spruance class Destroyer hulls, these are the most formidable escort ships ever constructed. They have outstanding anti-air capability, thanks to the SPY-1 radar coupled to the Aegis Weapons control system. Ticonderogas are also efficient undersea and surface warriors, and are now being evaluated as Theater Missile Defense platforms extending their reach towards space.

Taken October 1996 during San Francisco's Fleet Week. Note: We have several lower quality sets taken 10/88 at San Francisco of the Vincennes that are not listed here. They have a lot of good details, but the photo quality is not up to current standards, Write if interested.

The following views were taken at San Francisco, CA during Fleet Week, October 1995 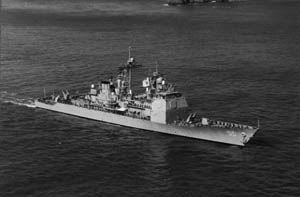 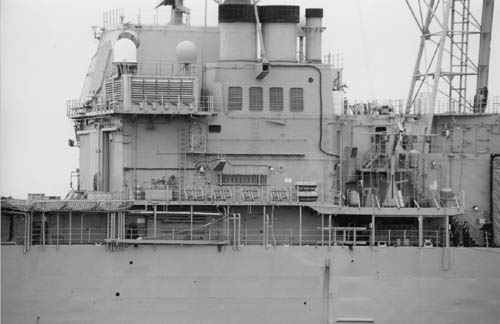 Taken July, 2010 at San Francisco, CA, these photos can be zoomed in on if you choose digital delivery

Taken December, 2018 at San Diego CA, these photos can be zoomed in on if you choose digital delivery

Set CG54E 20 views, from Golden Gate Bridge, mosaic bow to stern along starboard side, back lit, but good details Q8 $ 15.00

Photgraphed October 2011 at San Francisco.  These are digital photos;  if you order them for electronic delivery you will be able to zoom in on the details.

Taken June, 1994 in the English Channel, during the 50th anniversary of D-Day remembrance

Photographed in 2001 by Duane Curtis

Photographed October 2015 at San Francisco, CA.   These are high resolution digtial shots, so digital delivery is recommended to see the great details.

These good looking ships served for almost 25 years escorting the fleet, mainly against airborne threats. All of these ships have been decommissioned and await disposal.

Photographed in the late 80's by Lee Upshaw

Photographed March 1994, after her decommissioning. 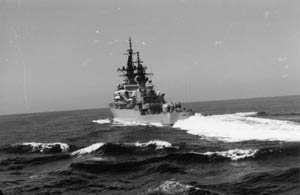 Similar to the above Belknap class but with two missile launchers, so they were known as "Double Enders". They too are gone from the fleet.

Converted Cleveland Class Light Cruisers, they retained their forward triple 6"/47 turret(s), with the aft being landed to create room for either a Terrier or Talos launcher.

Preserved at Buffalo, New York, she is the only likely survivor of the conversions done to a variety of ships in the race to give the US Fleet missile capacity.

Photographed at Port Huneme, CA when she had been converted into a target ship. Since sunk as a target.

Converted from Baltimore Class Heavy Cruisers, they swapped their guns for Tartar and Talos missile systems, and in the process, aquired completely rebuilt superstructures, resulting in some of the most unique and recognizeable warships ever built.  You either love 'em or hate 'em, but they were true originals. They are one of my favorite ship designs.

The largest and most powerful Heavy Cruisers ever built, mounting the only full automatic 8" gun ever built. The Salem is preserved at Quincy, Massachusetts. The following views of the ship were taken shortly after she arrived there, and before much restoration work and painting had been done.

Set CA139J 20 views, in drydock before and after work has beendone, props, rudders and overall views - interesting set Q9 $ 15.00

Largest class of heavy cruisers in the history of the US Navy, they served for many years after World War II. Some were convertedInto Guided Missile cruisers. None were preserved, all were scrapped during the 70's and 80's.

Photographed at Bremerton, Washington by L. Upshaw 1979 shortly before she was scrapped. Prints have a blue cast to them.

Set CA73A 37 views, onboard details, main guns, secondary guns deck and superstructure, hanger hatch details. Some shots are blurry; all are blue tinted. Still, many useful shots of this ship Q8 (some shots are Q7)  $ 27.75

The Canberra was torpedoed and heavily damaged in October. 1944.  This set documents the damage and repair.  Official photos courtesey of Lee Upshaw.

Note that this set is in black and white

One of the first ships of the "new" Navy, she served prominently in the Spanish American war of 1898 as Admiral Deweys flagship. Known at the time as a Protected Cruiser, she was fast, carried a good armament, with moderate protection.

Photographed at Philadelphia, PA August 1994 where she is a museum vessel.