The Legend class is being built to eventually replace the Hamilton class cutters.  They are the largest cutters ever built for the Coast Guard, and represent the keystone of the "Blue Water Project", a series of programs intended to modernize the Coast Guard and better help it meet the missions of the 21st Century.

Photographed at Alameda, CA and in San Francisco Bay, October 2008

Set WMSL750C 28 photos, from Golden Gate Bridge, starboard side from above, ship is steaming away from vantage point Q9 $ 21.00

Built during the late 60's and early 70's, these handsome ships are the largest in the Coast Guard's inventory, next to the Polar Class Icebreakers. They are being modified in a FRAM program, upgrading the 5" gun to the Oto Melara 76mm, adding Harpoon missiles, Mk 32 torpedo tubes, etc.

Set taken 6/94 in the English Channel

Built during the mid 1930's, serving well into the 80's (Nobody can accuse the Coast Guard of not getting full value from their ships!), these large cutters all saw service in a variety of wars and lower level conflicts. Considered among the most handsome vessels ever built for the Coast Guard, they have all left the fleet. Two are preserved as memorials.

Photographed at Charleston, SC 9/93 as a museum vessel.

The Taney, a Pearl Harbor survivor, is preserved at Baltimore, MD. Photographed 8/94

Former US Navy Salvage ship transferred to the Coast Guard after WWII.

Former Seagoing Buoy Tender pressed into service as a medium endurance cutter in 1979. She has had the characteristic bridge boom removed as part of the conversion.

Built during the early 30's. They saw extensive service during World War II.

Sold after the war, the ship has been preserved as a working memorial at Wilmington, DE.

Built during the 80's and early 90's to replace and improve on earlier, smaller patrol boats. They were built to a design by Vosper Thornycroft in England. 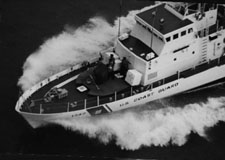 43 boats of this class were built during the 60's, making it one of the most common sites in harbors around the US. Many are still active.

Just entering service, they are designed for dealing with very heavy surf

Keeper Class Just coming into service replacing the tenders built during the 40's and 60's, named after famous Lighthouse Keepers.

Once a common site outside the ports of the US, they have been replaced with a variety of other aids to navigation, including radio and light sea buoys. A Note on names: The Lightships took the name of the station that they were on at the time, so the same ship might have different names at different times, or there would be more than one ship with the same name. Confused? - try sorting the pictures sometime!

Taken at New York City, August 1994, at the Intrepid Museum; a different ship than above.

Taken at Portsmouth, VA September, 1993 She is in a landlocked display.